This inaugural cohort is a group of current and former professional athletes who have reached the highest levels of their sport while maintaining a commitment to their communities. 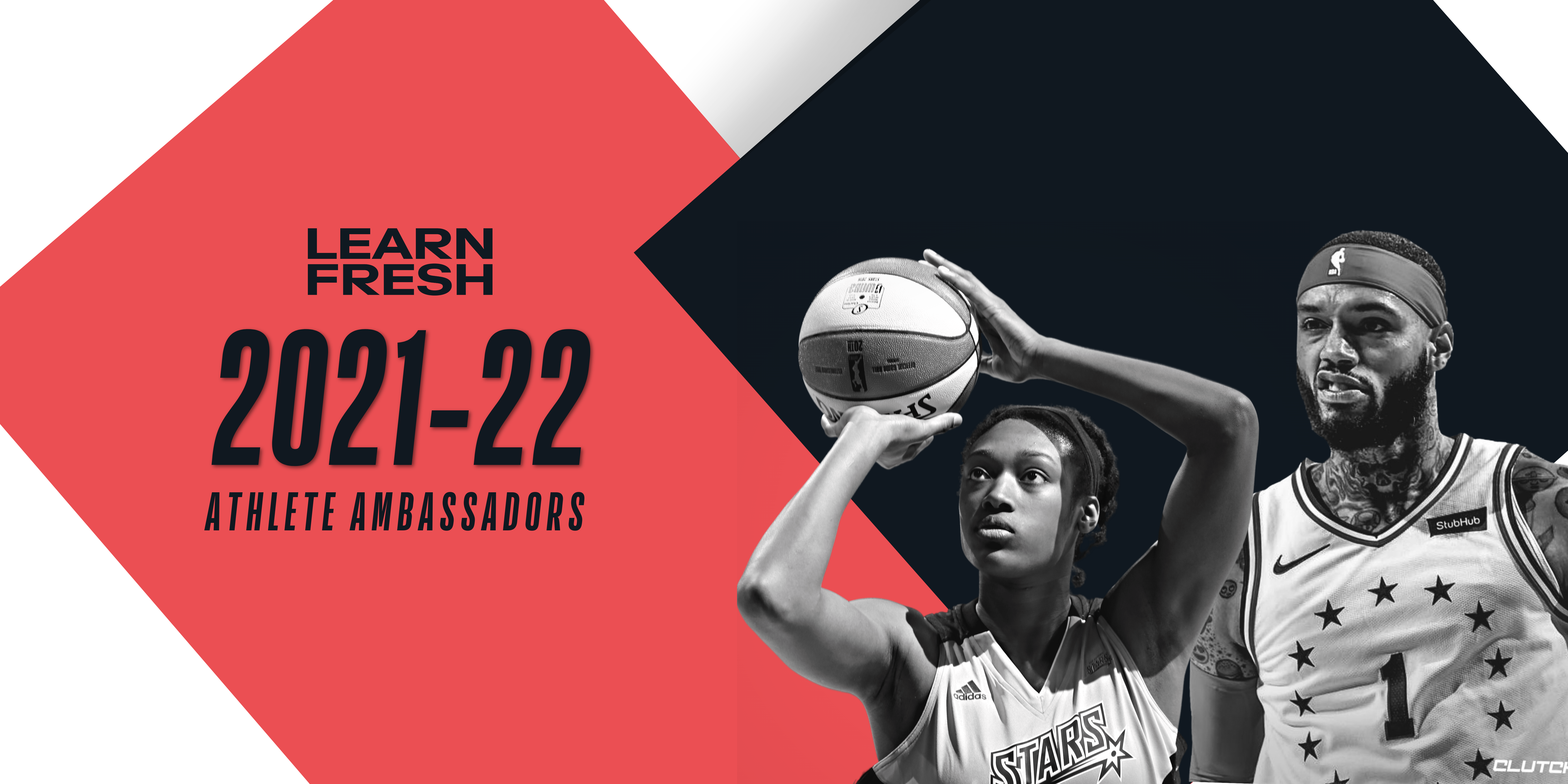 Introducing the 2021-22 Learn Fresh Athlete Ambassadors! This inaugural cohort is a group of current and former professional athletes and Learn Fresh supporters who have reached the highest levels of their sport while maintaining a commitment to their communities. These individuals understand and value their impact off the court, and provide inspiration for Learn Fresh programs and the students that they serve.

Mike Scott is a Learn Fresh Board Member, veteran of several NBA teams, a current free agent, and most recently a key player in the Philadelphia 76ers offense. Mike starred at the University of Virginia before being drafted by the Atlanta Hawks in the 2021 NBA draft, and throughout his NBA career, he has developed an avid fan base for his spirited personality. The son of teachers, Mike will bring a passion for education and the community to his dual role with Learn Fresh, assisting with marketing and communications as a board member while advocating for NBA Math Hoops and other Learn Fresh programs as an Athlete Ambassador.

Kayla Alexander is a Learn Fresh board member, activist, author, and professional athlete who played seven seasons in the WNBA and is a member of the Canadian women’s national basketball team that competed in the Tokyo 2020 Olympics. She brings a lifelong passion for education and youth development, and is working in support of Learn Fresh programming through her role as a board member. Kayla is currently based in Russia, where she plays for Dynamo NR of the Russian Professional Basketball League!About the 2021-22 Learn Fresh Athlete Ambassadors: This group of current and former professional athletes are committed to helping Learn Fresh leverage students’ passion for sports and entertainment to inspire their STEM and social-emotional learning. These individuals have reached the highest levels of their sport while maintaining a commitment to their communities, and they serve as advocates for Learn Fresh’s programs and vision to make learning fun for all students while striving for equity across the STEM pipeline.

Harrison Barnes is a current NBA player with the Sacramento Kings, and a leader within the NBA’s philanthropic community, serving on the board of the NBA Foundation. A native of Ames, Iowa, Harrison attended Ames High School, where he graduated near the top of his academic class, and as the number one national high school recruit of the 2010 class. Barnes attended the University of North Carolina, and went on to be drafted by the Golden State Warriors in the first round of the 2012 NBA draft with the seventh overall pick. He won an NBA championship with the Warriors in 2015. Within the NBA, Harrison Barnes is known for his commitment to the community. He made donations to a different nonprofit organization for every game he played in the NBA bubble during the 2020 season, using the events to highlight their missions across his social media. Harrison has given heavily in support of food security in the communities of Dallas and Sacramento during the pandemic, and was one of five players honored with the 2020 NBA Cares Community Assist Award. Harrison has—along with his wife, Brittany—devoted particular attention to education-related community work, encouraging student engagement in science, technology, engineering, and math. Be sure to check out Episode 3 of the Learn Fresh Podcast to hear commentary from Harrison in a discussion about sports, education, and social change!

Rajon Rondo is a professional basketball player from Louisville, Kentucky. He began his NBA career in 2006 with the Boston Celtics, and has gone on to play with the Dallas Mavericks, Sacramento Kings, Chicago Bulls, New Orleans Pelicans, Atlanta Hawks, and Los Angeles Clippers. Currently, he plays as a point guard with the Los Angeles Lakers. Among his many on-court accomplishments, Rajon is a two-time NBA Champion, four-time NBA All-Star, and has earned four NBA All-Defensive Team honors. Off the court, Rajon is a passionate advocate for youth education. In 2011, he launched the Rajon Rondo Foundation as a part of the Bluegrass Community Foundation, which is dedicated to assisting youth in Kentucky. The foundation connects youth with resources and opportunities to become responsible, productive, and socially-minded adults. As part of this work, the Rajon Rondo Foundation is generously sponsoring NBA Math Hoops in program sites across Louisville for the 2021-22 season!

Shelden Williams is a former professional basketball player, Duke University star, and Oklahoma City native who spent six season in the NBA from 2006-2012. Known for his energy and aggressive defensive prowess, Shelden has transferred that energy in his post-NBA life into community work through the Shelden Williams Foundation. The Foundation is dedicated to empowering student athletes and their families by delivering and supporting initiatives that promote emotional and physical health through sports, education, and community involvement. As the son of educators, Shelden had the value of learning and academic achievement instilled at an early age, which helped propel him through graduation from Duke even as he geared up to enter the NBA. This focus on education has helped shape his Foundation work, and has made Shelden a natural partner for Learn Fresh: This year, the Shelden Williams Foundation is sponsoring a new cohort of NBA Math Hoops program sites in Atlanta Public Schools for the 2021-22 season.

Ivory Latta is a professional basketball player from South Carolina who spent 11 years in the WNBA, along with stints in Israel and Turkey. She is the all-time leading scorer in South Carolina high school basketball history, and was a Gatorade Player of the Year at York Comprehensive High School. She went on to a storied career for the North Carolina Tar Heels before being drafted by the Detroit Shock in 2007. Off the court, Ivory has spent many years serving as an Ambassador for the Parkinson’s Disease Foundation, and she is known for her energetic presence, resilience, and leadership. She is the author of a book, “Despite The Height”, about her journey to the WNBA.